Due to continued changes in market conditions that impact our costs, our prices and turn around time listed in the website are subject to change. Please contact us for availability and price before making an order.

Ammonium sulfate/ (NH₄)₂SO₄ or H8N2O4S is an inorganic salt. It is a white clear crystalline compound. This product is available and one can get this chemical as DNase, RNase, and Protease free. The ammonium sulfate is most widely used in sample preparation, chemical research, biochemical research and agricultural studies. It is highly soluble and hence provides versatility to use as chemicals in test methods, sample preparation and other numerous products formulation or Microbiological, Chemical and Food testing methods. Primarily the ammonium sulfate is used as a fertilizer for alkaline soils. Ammonium ions are released in the soil and it forms small amounts of acid, which lowers the pH balance of the soil, while contributing necessary nitrogen for plant growth. It is also used as a food additive as an acidity regulator in flours and breads. It has some other uses such as ammonium sulfate is used for the treatment of drinking water, preparation of other ammonium salts and flame retardant. 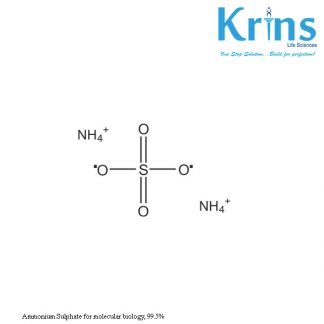