Due to continued changes in market conditions that impact our costs, our prices and turn around time listed in the website are subject to change. Please contact us for availability and price before making an order.

Scales HY10.KTP series for control of prepacked goods (PGC) in a single stand version
Scales HY10.KTP series is equipped with module for control of packed goods. The module is supported by database containing products and operators lists. A control started by the scale is automatically stopped after pre-defined quantity of packages (samples) has been controlled. Number of the packages is fixed by scale program depending on product batch size. Scales features 10,1″ colourful, graphic touch screen display and full alphanumeric keyboard aiding scale operation and setting control parameters.

Control cycle runs according to the following scheme:

Each carried out control is ended with a final report containing all information that is necessary for prepacked products control report. The report is automatically saved in scales memory and at the same time it can be printed by printer connected to the scales.
Scales HY10.KTP series as a single stand version for control of prepacked products is supported by computer application “ViewerPGC” . It is used for monitoring and/or printing of products’ control reports and packages’ tares from completed controls. The reports are printed on a printer connected to a computer. 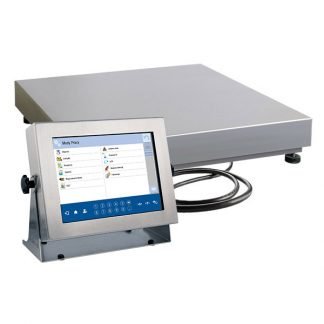