We serve B2B,Due to continued changes in market conditions that impact our costs, our prices and turn around time listed on the website are subject to change. Please contact us for availability and price before making an order. Our Chemical is not Food Grade. We do not accept order of Chemicals and other restricted products at our discretion from Individual. We can not sell and ship chemicals to Individual and residential customers.

Labelling system series TMX is used to print labels for marking weighted goods e.g. in the process of packing.
The program can generate standard labels for single goods.
Functionality of the software:
– a function of weight control (weighing control + / -),
– previewing weighments carried out on weighing terminal as a table of weighments,
– simplified reporting module allowing the report to be generated,
– creation of label templates from labels in weighing terminal,
– identification of goods by using the code EAN-13 and EAN-128,
– quick search using the range of barcode scanner,
– the availability of databases: the operators, products, clients, warehouses, tares (packages), etc.
The application enables measurements execution and their record into a local database or on the server. Networked terminals allow transmission of the measurements to the parent database installed on the server.
The ability to work with a computer program ACCOUNTING E2R.
Dosing scales TMX series
Dosing scales is linked to an external automation system, including controls and regulations. This device allows automatic, semi-automatic or manual dosing of loose substances and liquids.
Software of dosing scales series TMX – TERMINAL E2R FORMULA enables weighing of components from selected formula according to production orders. Defining formulas and production orders can be executed from a terminal level or through supervising software with the possibility of declaring thresholds for selected component.
Functional possibilities:
? Access to data bases: assortments, operators, contractors, warehouse, formulas, processed orders and tares,
? Scaling of components mass which constitute for a formula (formula mass multiplier),
? Possibility of setting tare mass for each component of a formula in dosing mode,
? Declaration of quantity of formula cycles,
? Possibility of interrupting a dosing process at any time,
? Cooperation with external keys for TARE, ENTER, START, STOP, DEFECT,
? Possibility of cooperation with 12 inputs / 12 outputs (opto-isolated),
? Execution of production orders,
? Peviewing weighing records on weighing terminal in a form of a chart or list of orders,
? Simplified Report Module for generation of reports according to set filters:
o Product code and name,
o Operator code and name,
o Contractor code and name,
o Formula code and name,
o Weighing date,
o Batch number,
o Scale number.
? Possibility of summing of filtered data in a form of:
? Sum of weighed components mass,
? Quantity of measurements for selected component,
? An average from measurements of weighed component,
? Minimal mass of weighed component,
? Maximal mass of weighed component.
? Operation of peripheral devices:
o Receipt printers,
o Label printers,
o Bar code scanner,
o Transponder card scanner.
Possibility of cooperating with computer software E2R Formula.
Formula making scales TMX series
The software of formula making scales series TMX / R – TERMINAL E2R FORMULA enables weighing of selected components according to production orders. Defining the formulas and production orders can be executed from a terminal or through the supervising software with possibility of declaring the tolerance limits for each component.
Functional Features:
– the availability of databases of goods, operators, contractors, warehouses,
formulas, executed contracts, tares (packages), etc.
– scaling bulk being a part of a formula (weight factor of the recipe)
– the ability to set the tare mass of individual components during formulation process,
– declaration of the number of cycles for the given formula,
– the possibility of interruption a formula making process at any time,
– cooperation with external TARE, ENTER, START, STOP, FAILURE buttons
– the possibility of using up to 12 inputs / 12 outputs (opto-isolated)
– execution of production orders
– preview of the weighing records on a scale terminal as a table with weighing data or a table of orders,
– simplified reporting module allows the report to be generated by the set filters:
? code or the name of the product,
? code or the name of the operator,
? code or the name of the contractor,
? code or the name of the recipe,
? date of weighing,
? number of batches,
? number of weight.
– the possibility of summing filtered data in a form of:
– the sum of the masses of weighted component,
– the number of measurements for a given component,
– average of the measurements of weighted component,
– minimum mass of weighted component,
– maximum mass of weighted component,
– support for external devices:
? receipt printers,
? label printers,
? bar code readers,
? proximity card readers.
The ability to work with a computer program E2R. 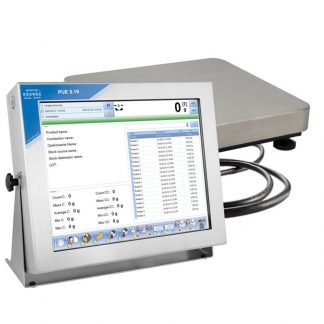